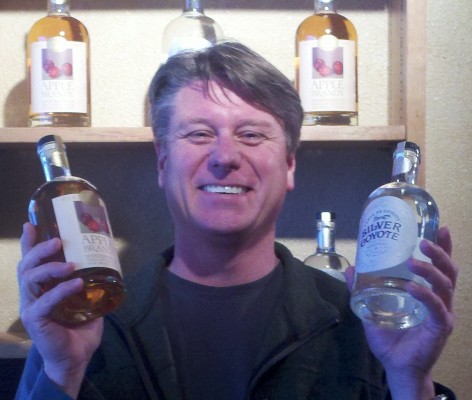 Ten years is a milestone for any small business, and keeping the doors open in 2020 is a challenge for businesses of any size, yet it’s October and Santa Fe Spirits has accomplished both. When asked if he thought he would get here, Colin Keegan replies “I never really doubted that we would make it. The last few years have been difficult, especially 2020, but we have such a strong team willing to hunker down.” He pauses. “It is very different from what I envisioned at the start.”

The original concept was “me in a building on the Southside, making good spirits.” Then the consideration of selling came into play, the spirits took on legs, Colin moved from the distillery to a desk, and the business side of business took over. “The most humbling thing was learning I do not know how to sell.” So getting the right people was important. “The reduced (due to COIVD-19) team we have in place is definitely part of the success, everyone has been working twice as hard to get the same results.”

Creating a distillery from the ground up and throwing himself into the deep end of the spirits world, navigating the three tier system, breaking into new markets, showed Colin a lot of the challenges faced by his new industry, which was almost as new as Santa Fe Spirit. Not one to sit by and wait for things to catch up with him, Colin became one of the founding members of the American Craft Spirits Association (where he is currently a board member), he created the New Mexico Distillers Guild, sits on the Craft Spirits Advisory Board of the Distilled Spirits Council of the United States, is a founding member of the American Single Malt Whiskey Whiskey Commission and is past President and current board member of the Santa Fe Chamber of Commerce. “I want to help move things forward.”

Santa Fe Spirits is hitting its ten-year milestone “leaner, smarter, more cautious, wiser. What doesn’t kill you makes you stronger – the plan is to keep doing it.” Of all these accomplishments, Colin is most proud of “making it to ten years in the liquor industry in a small state like New Mexico.” What’s to come for Santa Fe Spirits in the next ten years? “I’d like to see it as one of the City of Santa Fe’s success stories and would hope Santa Fe Spirits continues to be regionally recognized as a boutique manufacturer of excellent spirits. As I took inspiration from older distilleries, I’d like to think Santa Fe Spirits inspires the next wave. That’s what I’d like – to be an inspiration.”