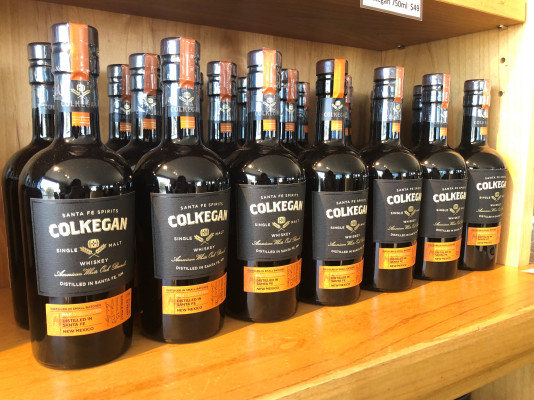 We've been putting aside a few cases of each batch since batch four, and we've decided it's time to release some of these old batches.  We've decided to do so in the form of a Vertical Release event.  For those not familiar with the term, a vertical is a selection of the same product, but with offerings from different vintages, or batches.

The line-up for our June Vertical Release: Batches 4,6,9,11,13, and 16.  We sat down and tasted these the other day, and it was pretty special. We try to make each batch of Colkegan similar to the previous batch, yet better, so we know that while batch 21 might taste similar to batch 20, batch 21 might not taste that much like batch four.

Batch one (which we don’t have hiding in back stock) was released in September 2013.  Batch four, the first in the vertical, was bottled in January 2015, so we were still fairly young.  We weren’t exactly sure what to expect when we tasted it, a lot of our early reviews said Colkegan was super-smokey, so some of us thought we might be about to taste a smoke-bomb.  But the consensus around the table was…we’re not going to tell you!  You’ll have to come to the event and taste it for yourself!

The VIP tasting will be limited seating and will include a guided tasting of the above-mentioned batches alongside our current batch.   The VIP tasting will also include an individual charcuterie plate and a Glencairn glass.  VIP guests will have the first opportunity to purchase bottles from these batches and will receive a 20% discount on any purchases made on the day. VIP guests are welcome to stay for the general admission part of the event.

This will be a great opportunity to see how Colkegan has changed over the years and to stock up on some older batches.

*Once re-released these batches will be for sale exclusively at the distillery tasting room until sold out.