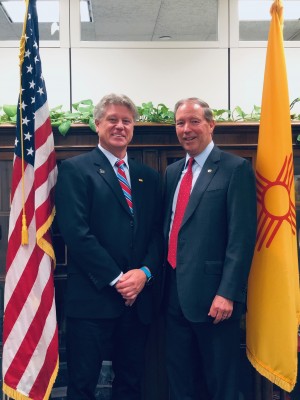 Colin Keegan is a busy man. His duties at the office/distillery alone keep his calendar fairly full, but it doesn’t stop there. He goes out in the market with our sales reps; he makes an appearance at all of our events; he drops in at store tastings, both in New Mexico and Colorado; he’s a founding member and President of the New Mexico Distillers Guild; he’s on the Board of Directors of the Santa Fe Chamber of Commerce. And now he’s taking on Washington.

Last week Colin, along with over 150 other craft distillers and members of both DISCUS and ACSA, traveled to Washington D.C.to participate in a public policy conference about the future of the Federal Excise Tax cut, which is due to expire at the end of 2019. (Read this Forbes article for all the info). New Mexico Senators Tom Udall and Martin Heinrich both signed the Craft Spirit Modernization and Tax Reform Act of 2019 (S. 362) in March, and all three New Mexico Congressman; Rep. Debra Haaland, Rep. Ben Ray Lujan, and Rep. Xochitl Torres Small have also sponsored the bill. Colin met with them each to thank them on behalf of Santa Fe Spirits, the New Mexico Distillers Guild, and the American Craft Spirits Association. Passage of this bill would be a boon for all New Mexico craft distillers and will help us put more money into New Mexico jobs and give us the ability to compete with larger companies.