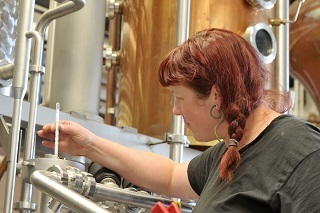 While it hasn’t yet been scientifically proven, there seems to be a definite link between cyclists and artisanal distillers.

Which is largely how the Outside Bike & Brew Festival came about. Not only to cater to the many cyclists and beer enthusiasts here in town, but to introduce Santa Feans and outsiders to the many other fine libations and trails they may not have been previously aware of.

And in only three years (this year being its third incarnation) the Outside Bike & Brew has become one of the premier events of its kind in the country. Having smoothly blended fine handmade beers with finely crafted bikes trails; the Bike & Brew has essentially attached itself to—if not absorbed—the Santa Fe Century, the 31-year-old 100-mile bike ride that takes riders on a loop from Santa Fe through the Turquoise Trail and Galisteo and back into town.

Now in its third year (and elements-tested after three consecutive days of rain last year, in which its 6,000 participants were hard-pressed to fully unwind), the Bike & Brew combines the best of a bike festival (expos, guided rides, fondos, and glow rides—for amateurs and pros alike) with the best of a brew fest (beer runs, dinners, tap takeovers, tasting rooms, and tours de brewers and tours de ciders).

Plus, there’ll be quality music (headline acts including The Lonely Wild and Con Brio), top-notch participating restaurants (L’Olivier, Joseph’s, Anasazi), and that unmatched feeling of having found one’s tribe. (Even better, six-time world mountain biking champion Rebecca Rusch returns for another sold-out series of women’s rides and clinics—all part of the SRAM Gold Rusch Tour. “We’re thankful for the enthusiasm and excitement the women of the Santa Fe area bring to the clinics,” says Rusch’s manager Colleen Quindlen. “The tour features five unique events with the goal of increasing women’s participation in mountain biking and cycling by offering fun, social, and non-intimidating venues that educate and empower.”)

And when riders have gotten all hopped out, Santa Fe Spirits is the place to go for a more sophisticated beverage—from our Colkegan Whiskey and Wheeler’s Gin to our Silver Coyote Pure Malt Whiskey.

“I suspect there is a link,” says Petras “Pepi” Avizonis, when asked about the connection between cyclists and artisanal distilleries. Avizonis would know. He was a physicist and cyclist in Albuquerque before relocating to Plymouth, Massachusetts, where he founded the Dirty Water Distillery. “A link in the area of adventure, hard work, and discovery.

“Cycling is about riding hard, the reward of doing the work, getting from A to B, and knowing I had done it of my own power,” adds Avizonis. “Sort of a discovery thing. Artisanal distilling offers a similar sense of discovery for people—there’s more risk-taking and experimentation with new things at microdistilleries.”

“Cyclists are a competitive group, but they also have a great culture of camaraderie for all levels of the sport or activity,” says Karen Paramanandam, Marketing Director at SunPower by Positive Energy Solar, one of the many sponsors of the event. “I see this in the brewer community as well. They have a mutual respect for each other and true beer enthusiasts are stoked to try different brews, compare notes, and share their knowledge with newbies.”

“Bikes come first for most folks,” says Tim Fower of the Santa Fe Fat Tire Society, another B&B sponsor. “But fortunately at this festival, we don’t have to pick a favorite.” The three big rides will all be on Sunday: the Century, the Gran Fondo (where riders can time themselves against the clock and others in their age bracket, and which follows the same route as the as the 104-mile-long Century), and the Big Mountain Enduro (a one-day backcountry race entailing upwards of 7,500 feet of long rocky descents).

“The big picture for Santa Fe County is that outdoor recreation is one of our target industries, both from a visitor perspective as well as a business recruitment perspective,” says David Griscom, economic development manager and film liaison for Santa Fe County, another B&B sponsor. (This year, Griscom expects 10,000-plus attendees.) “The Outside Bike and Brew festival brings in mountain bike riders, including professional mountain bike athletes from all over the United States, and is an opportunity to highlight the world-class trails that we have.”

“We get to experience great new breweries from all over New Mexico, and interface with bike and bike-culture vendors from all over the country,” says Paramanandam. “For us in particular, we get to align a brand with a really great lifestyle experience.

“Our company has a definite bike and brew culture,” she adds. “We have a healthy appreciation for both activities and tend to sponsor or participate in these types of events all over the state.”

And, adds Avizonis, “the same people who enjoy learning that they could do that [ride 104 miles or make it up and down some of Santa Fe’s trails] also enjoy the discovery of spirits made by likeminded people.”