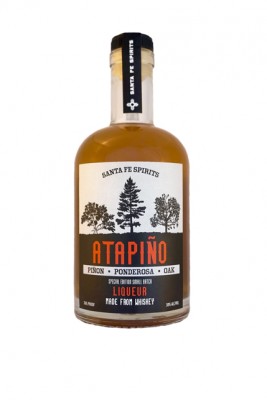 Santa Fe Spirits, New Mexico’s largest distillery, has released a new liqueur that pays homage to the beautiful Sangre de Cristo Mountains that hover over town. The new liqueur, called Atapiño, is made from local ingredients like piñon nuts and ponderosa pine resin.

Atapiño was inspired by the smells head distiller John Jeffery encountered while trail running on Atalaya Mountain near town. Lower on the mountain, piñon trees and their tasty nuts, crowd the steep slopes. Santa Feans buy the nuts from roadside vendors all over town and take them home and roast them and eat them as a tasty treat. The aroma given off while roasting is devine.

Santa Fe Spirits roasts the piñon nuts and puts them into a barrel to soak in Silver Coyote single malt white whiskey for two months to extract the essence of the piñon.

At the top of Atalaya mountain, nearly 2,000 feet above Santa Fe, ponderosa trees sway in the breeze. Their resin also gives off scents of vanilla and pine. Jeffery collected this resin and used it to sweeten Atapiño and give it the flavor of the Mountain West. The result is a liqueur that truly encapsulates the territory of Santa Fe in a bottle.