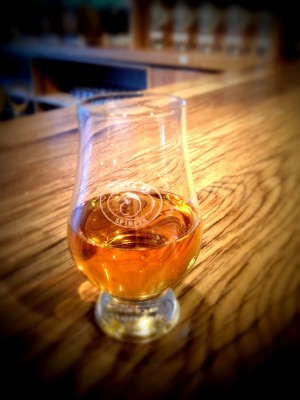 The glencairn glass was originally developed by Glencairn Crystal (go figure) in an attempt to make a glass that could mimic the glasses that are used in whiskey labs and distilleries around the world in order for whiskey producers to get the most effective taste and create the best product. The glencairn glass is one of a few types of glasses that have been designed specifically with whiskey in mind, but it is the only glass that has been endorsed by the Scotch Whisky Association.

It is little wonder, given this history, that we at Santa Fe Spirits have chosen the glencairn glass as the ideal way to serve our mesquite smoked single malt whiskey, Colkegan. Although Colkegan is not technically a Scotch because it is made in the United States, it is made using the same malting and distillation process as a traditional Scotch (if you replace peat with mesquite), and we don’t want to be left out of this great glass phenomenon.

The iconic shape of a glencairn glass has a distinct purpose: to hold and focus the aroma of the whiskey. Try using a tumbler and you will still experience a great taste, but bring a glencairn to your lips and you can’t possibly miss the blast of aromatics positioned perfectly under your nose. Now, when you bring a glencairn full of Colkegan whiskey to your mouth, what should you expect?

Well, what we have tried to produce is a very southwestern style whiskey, so you will smell oak from the barrels, some vanilla tones from the oak (giving it a sweetness), smoke from the charred inside of each barrel, and primarily mesquite. I have had several experiences when people have exclaimed that their Colkegan Whiskey smells like a barbeque. Mesquite is, in fact, a traditional BBQ fuel source, but we think that it makes for an awesomely unique Scotch style whiskey.

So the next time your sitting down with a whiskey neat (we hope Colkegan Whiskey neat) try out the perfect whiskey glass, and see if you think, as we do, that smell really does enhance taste.

Don’t forget, we sell Santa Fe Spirits engraved glencairn glasses at both of our tasting rooms!