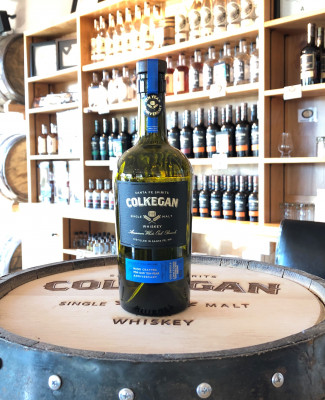 American single malts have been gaining in popularity and availability in the last several years. Unlike Scotch, American single malts do not abide by legal standards of production (yet). This allows distillers some creativity in their approach. Colkegan has been set apart by smoking the malt with mesquite, prevalent in Santa Fe Spirits’ home state of New Mexico. They are among the only distillers in the world who use this particular type of smoke and the result is a single malt that distinctly represents the American Southwest.

With positive responses to their previously released fruit finished whiskey Santa Fe Spirits chose to enhance their whiskey with the fruitiness of a sherry cask finish. Founder Colin Keegan said at the time of its releases that “the apple brandy finished Colkegan was a huge success. We decided to build on that success by trying a different finishing variation”. When proofing down the Colkegan PX barrels head distiller Kris Bohm used the élevage process of gradually adding water while the whiskey was still inside the cask. To explain this process he said, “This extracts different sugars from the wood. It helps the whiskey take on more character from the cask.” In this case the character from sherry casks would be, “stone fruit, cherries – a richer flavor profile”.