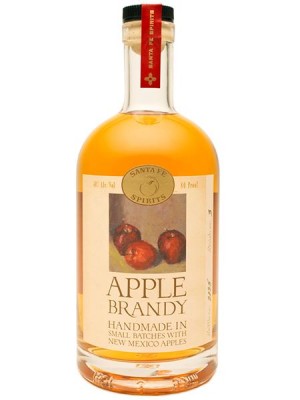 Many people know that our Apple Brandy was the catalyst for starting Santa Fe Spirits as a company. ​Our company’s owners, the Keegans, live in an amazingly beautiful part of Santa Fe called Tesuque. This valley houses the tesuque river and is by far one of the most luscious and vibrant parts of our desert city. Now, in Tesuque the Keegans own an apple orchard and several years ago they began inviting friends over to pick and press apples, sending all of them home with more apple juice than they could hold. The idea to make apple cider and then distill brandy was born from the great juice they could produce from the New Mexico apples.

At this point it was time to start distilling for real and Santa Fe Spirits was born. Now, Brandy isn’t a spirit that many people know that much about so lets start with the basics. Brandy, by definition, is a spirit fermented and distilled from fruit. Because we already had an awesome local apple supply, this seemed the clear choice. However, once you choose your fruit base there are several directions you can take. We decided to go with the Calvados method (Calvados is a brandy made in the Calvados region of France and as such nothing made outside that region can carry the Calvados name), but with a bit of our own twist on it. Calvados brandy is a spirit made from the juice of a fruit. This means that only juice and yeast are put into the fermenters and we leave out the skins and seeds. Calvados also means that there is no sugar added to the brandy. Our Santa Fe Spirits Apple Brandy is very dry, not like a sweet dessert brandy that may be seen more often. In the use of the juice and the lack of sugar we stayed true to the Calvados style. However, we began to shift when it came to the again of the spirit. Brandy is traditionally aged in huge barrels (up to 900 gallons) for many years. Our brandy is aged in 25 gallon barrels for ten months. There are two reasons for this choice. One, it is just faster. In order to gout our brandy out with the taste we wanted, the use of smaller barrels was a much more logical option. As a micro-distillery in Santa Fe, New Mexico, 900 gallon barrels are difficult to come by. In a smaller barrel a higher percentage of the liquid touches the wood, meaning that it needs less aging time overall. The second reason was that we wanted a more oak forward profile on our brandy. If you’ve ever tried out brandy you will find that you don’t taste the apple right away but rather will get more of an apple aftertaste following a vanilla allspice blush from the oak. Where Calvados brandies traditionally smell very sweet, ours will be much more oak forward on the nose, reminiscent of a whiskey with the fruity notes much more subdued.

Santa Fe Spirits Apple Brandy is perfect for desserts as well as sitting by the fire on a crisp November (or any winter month) evening. We encourage you to try it out at one of our tasting rooms and maybe take a bottle home to share with family for the holidays!